During the past few weeks, a lot of amazing features have been integrated to GreenDroid. Some of those features includes item-based ListViews, XML-based ListViews SegmentedBar, etc. Today, I’d like to introduce you with a brand new addition to the GreenDroid library project: the ActionBar and all of its related classes.

Some of you may know, I’m strongly attached to make Android a great mobile platform. In order to that, I think it is compulsory to create user-friendly UIs. I really believe a great Android UI have to be be clear, need to focus on content and should be VERY easy to use … even if the user is my grandfather!

The concept of ActionBar has been introduced with the Twitter application for Android. More recently, we have seen this widget in the Google I/O 2010 schedule application. To sum up, an ActionBar can be considered as an advanced title bar that is capable of:

Google recently explained everything about the advantages of using ActionBar in your applications so I won’t spend a lot of time here talking about those key features. If you’re interested in knowing more about the ActionBar UI design pattern, watch the talk given at Google I/O 2010.

Note: As usual, snippets of code below are all extracted from the GDCatalog and GreenDroid projects. Those projects are available on GitHub at the following address: http://github.com/cyrilmottier/GreenDroid

The ActionBar and ActionBarHost classes

As we have previously seen, the ActionBar class represents an enhanced title bar that can be included in your layouts. It supports a large set of features described below:

Including ActionBar manually in your layout is a boring task and may be time consuming. To prevent you from doing the same actions over and over again, GreenDroid includes several useful Activitys:

How to use the GD-classes

As usual, the GD-classes have been designed focusing on GreenDroid’s development principles: improving easiness, fastness and efficiency!

Applying GreenDroid to your project

I won’t explain how to apply GreenDroid to your project. Indeed, I’ve discussed about that in a very long post that you can find here. Installation instructions are also available in the project’s readme

Make sure you application is a GDApplication

The default implementation of GDApplication always returns null values. Changing those values can be done by extending the GDApplication:

You can now change the class of your application:

Using the GreenDroid’s base theme

GreenDroid heavily relies on XML resources and especially on styles and themes. In order to use GreenDroid, make sure your application theme inherits from the GreenDroid base theme: @style/Theme.GreenDroid

When using a GDActivity you don’t need to manually add an ActionBar to your layout. The setActionBarContentView(...) methods take your layout and insert it in an ActionBarHost.

Setting the title of the GDActivity can be done using several ways:

Your application is notified everytime the user clicked on an ActionBar item via the onHandleActionBarItemClick(int) method.

Let’s start with an example. The following code is a very simple layout composed of a single TextView that will be used as the content of our GDActivity:

The GDActivity code is given below:

The result displayed an screen is shown below 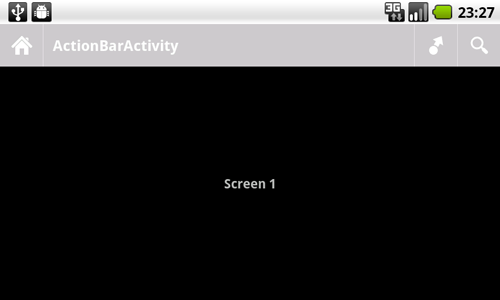 One of the most useful new GreenDroid’s feature is the ability to rapidly create fancy tabs. The following code shows a demonstration screen containing three tabs: 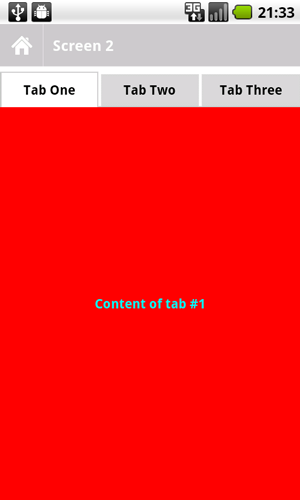 One of the biggest problem with previous releases of Android was the lack of great UI/UXs … I know/think Google is working hard on that right now to help developers creating consistent applications. I hope, GreenDroid will be a great solution to that problem and I strongly encourage you to use it as soon as possible : just keep in mind this is a work in progress that may need to be enhanced by developers like you! Happy coding!